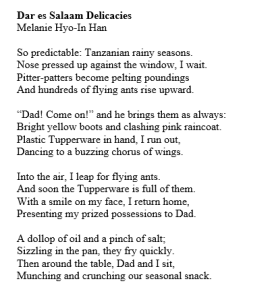 I’m Korean by birth, but I grew up as a TCK/MK in East Africa. I moved to the States in 2012 and have been living in Boston ever since, constantly thinking about my identity and where I belong.
When I was young, I was naïve. I wasn’t aware of the fact that I didn’t “belong” in Tanzania – the first poem, “Dar es Salaam Delicacies,” is about those carefree days when nothing mattered to me.
As I grew older and became more aware of the continent in which I lived, I began to realize that, even though I felt like I “belonged” in Africa, deep down inside, I knew I didn’t. I wrote the second poem, “African Alphabet,” to try to make sense of my “home” continent.
The third poem, “Fertilized Love Giggles,” addresses the fact that even though I don’t “belong” in East Africa, I don’t “belong” in Korea either. My identity as a Korean is interrupted by the fact that I can’t fully express myself in Korean.
Who am I? Where do I belong? How does my identity shape my worldview?
I know that the issue of identity and belonging is something that I will have to wrestle with for the rest of my life, but I consider it an honor, knowing that I wouldn’t be who I am today without my past experiences.